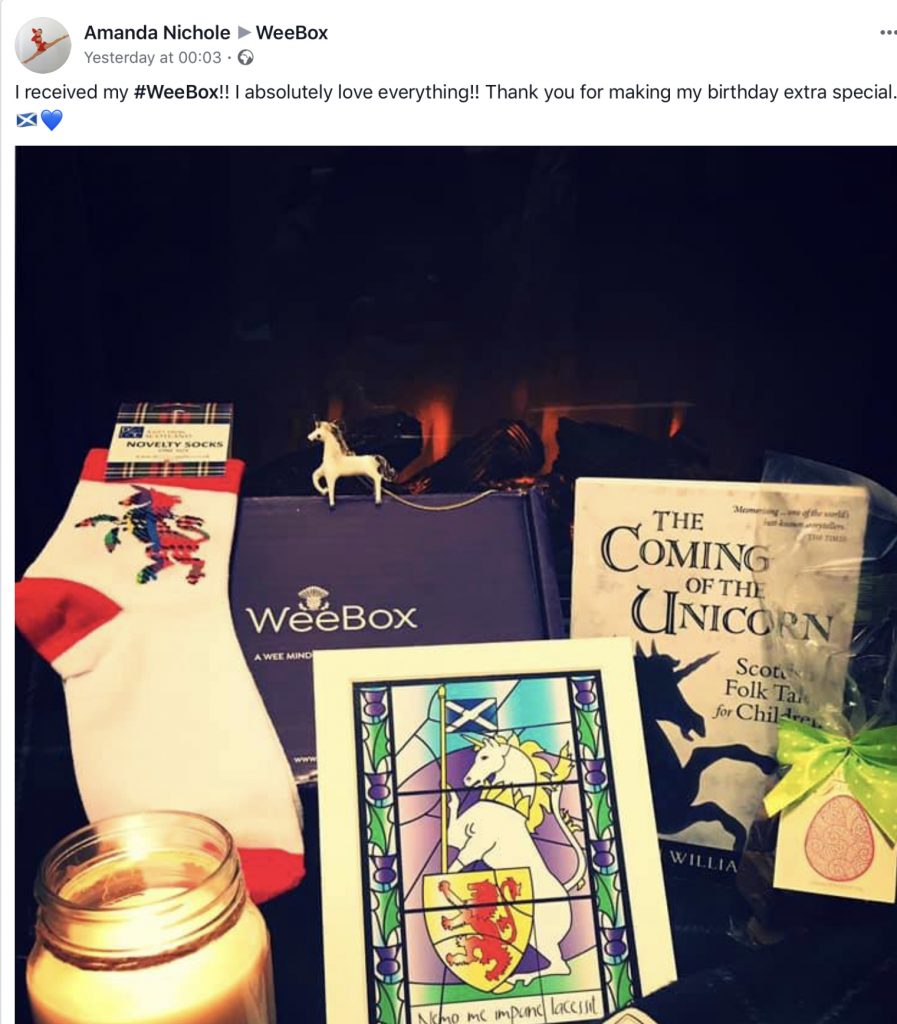 Did you know that the unicorn was Scotland’s national animal? The Scots had a thing for unicorns long before anyone else! While the animal is mythological, the ideals it represents are what make it a perfect fit for Scotland – proud, pure and powerful.  This month, enjoy the magic of ‘The Unicorn of Scotland’ WeeBox!

The Coming of the Unicorn

This mesmerising book by one of Scotland’s best-loved story tellers is utterly charming and brimming with mystical tales, a joy to own!

‘Stories are something you carry with you, something to last your entire life, to be passed on to your children, and their children for evermore.’

Duncan Williamson came from a family of Travelling People, who told stories around the campfire for entertainment and for teaching. As a child, Duncan learnt the ways of the world through stories: ‘My father’s knowledge told us how to live in this world as natural human beings — not to be greedy, not to be foolish, not to be daft or selfish — by stories.’

In this collection, he passes on some of these wonderful children’s folk and fairy tales. For over sixty years Duncan travelled around Scotland — on foot, then in a horse and cart, and later an old van — collecting tales, which not only come from the Travelling People but from the crofters, farmers and shepherds he met along the way. This collection includes tales about cunning foxes and storytelling cats, hunchbacked ogres and beautiful unicorns, helpful broonies and mysterious fairies.

The ‘Unicorn of Scotland’

The unicorn and its sacred bond with Scotland is associated with Scottish heraldry.  Enjoy this bonnie picture from a stain-glass window in St. Giles Cathedral, Edinburgh designed by the very talented Thomas of Brave Scottish Gifts.

Golden Chains of the Scottish Unicorn

Scottish unicorns are always portrayed with golden chains as a symbol of Scottish kings, so we’ve teamed up with Hamilton and Young to bring you your own Scottish gold chain and bonnie glass unicorn of your own!

“The Unicorn of Scotland, milk-white with gold hooves, horn and mane, has a coronet around its neck, like a collar, with a gold chain attached. It is thought that the chain was to show a great beast had been tamed to serve the king. As with most chained beasts in heraldry, its strength is emphasised rather than diminished by its shackles”

From one of our oldest, family confectionary companies ‘Gordon & Durward’ est’d in 1925 – indulge in Scottish fudge, perfect to bring a wee piece of Scotland to your family table.

Gordon and Durward was started in 1925, the name originating from the founders Mr & Mrs Durward, Mrs Durward having the maiden name of Gordon. They sold to George and Daisy Anderson in 1947. George was known locally as Sweetie Geordie, the business continued under the careful eye of the Anderson’s son John and his wife Pamela until they retired in 1989. The Donaldson’s, a well known Crieff family, then bought the business.

Graham and Caroline Donaldson have over the past 25 years steadily expanded the business to a point were the brand of Gordon and Durward is to be found all over Scotland and England in the finest retailers. We knew when we met Graham and tasted this, we had to share it with you!

Finally, treat your feet to a soft, unicorn embrace!

For a wee giggle, we’ve included magical socks.  So put your feet up and wear your tartan Unicorn of Scotland with pride.