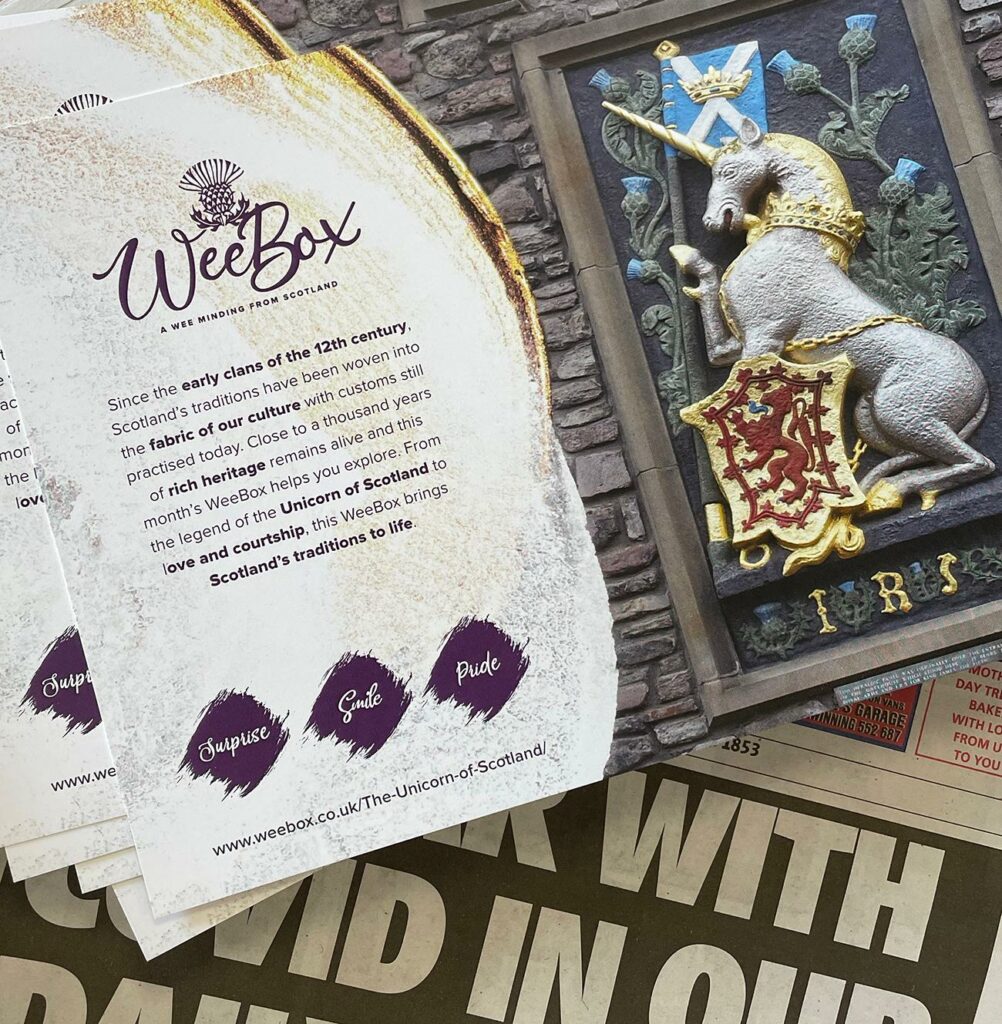 This April, WeeBox salutes our ancient traditions and our national animal, the Unicorn of Scotland!

Since the early clans of the 12th century, Scotland’s traditions have been woven into the fabric of our culture with customs still practised today. Close to a thousand years of rich heritage remains alive and this month’s WeeBox helps you explore. From the legend of the Unicorn of Scotland to love and courtship, this WeeBox brings Scotland’s traditions to life.

To a country as bold, fierce and proud as Scotland, one that was fighting for it’s independence from ‘oppressors’ this was the perfect choice as the ‘national animal’ that would appear on heraldic symbols.

Celtic mythology believed unicorns to represent innocence and purity whilst also being associated with chivalry, pride and boldness.

Fun Fact: We celebrate National Unicorn Day on the 9th April each year

Why is the unicorn chained?

WeeBox commissioned the most stunning gold chain and thistle scarf for your April WeeBox from our friends at EarthSquared.  This was to bring to life the golden chain always depicted on the unicorn representing Scotland in the coat of arms, which is often seen passing around its neck and wrapping all around its body.

It is believed that this symbolised the strength of the Scottish kings – only they were powerful enough to tame the bold creature.

Today in Scotland, ’aon-adharcach’ – the unicorn (Scots Gaelic) has left a lasting imprint on our country, from historic buildings to iconic statues.

Where will you go unicorn spotting?

The Kings Fountain at Linlithgow Palace: The birthplace of Mary Queen of Scots and once a glorious Renaissance palace.

High upon the Great Hall at Stirling Castle: One of Scotland’s most historically important sites, where you’ll also spot the beautiful Mystic Hunt of the Unicorn tapestry

A Holyroodhouse gatepost: the official residence of the Queen in Scotland.

The haunting WeeSounds of the Unicorn of Scotland

As always, we have curated the perfect soundtrack for your WeeBox April gifts – we hope you enjoy it as much as we do!