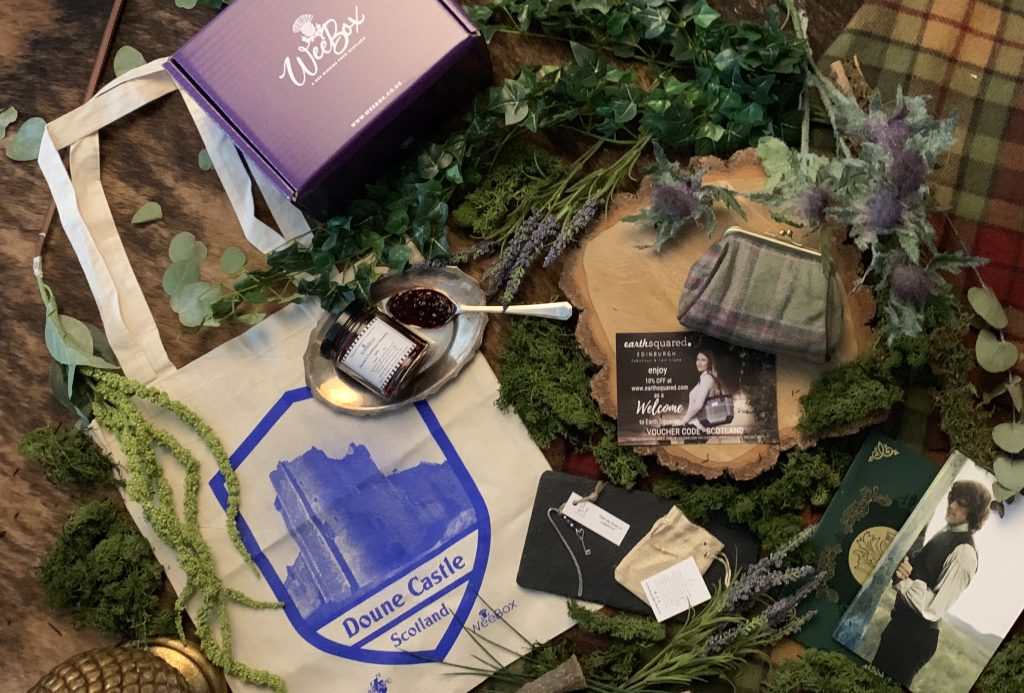 Be transported back in time with WeeBox and Diana Gabaldon’s Outlander books this month! Clans, tartans & tweeds, ancient recipes and of course, castles.  Delve into the history and romance of Scotland wherever you are in the world!

‘Take me home to Lallybroch’

Hand-crafted within a hairsbreadth of Lallybroch (Midhope Castle) by Louise of Leviko Designs, we bring you this stunning bookmark of gemstone and crystals which surround the ‘key to Lallybroch’.

Lallybroch is the ancestral home of Jamie Fraser, the fictional character in the Outlander series, set in 18th century Scotland. Jamie is a Scottish soldier and landowner, well-educated and raised to be the future Laird of Lallybroch. Midhope was built in the 15th Century and was built by John Martyne, laird of Medhope. It was rebuilt in the mid 1600s and remains much the same today.

Dresbach credits Scotland’s “extraordinary” craftsmanship and the country’s “real integration of nature into the work that’s done here” for the long-awaited fashion reinvigoration. So we’ve found you this bonnie tweed purse, designed by Earth Squared, a local design house based in North Berwick, near Edinburgh … which one did you get?

Diana Gabaldon’s ‘The Fiery Cross’ brought us inspiration to create this exclusive bramble jam hand-crafted by Pipsqueak Preserves! The bramble or Smear Dubh was much valued by old Highlanders and this old-fashioned jam, is Pipsqueak Preserves re-imagining of what Phoebe Sherston would have brought to the battlefield at Alamance.  Enjoy and take a step back in time!

“Jamie and the Governor, shaken out of their nose to nose confrontation, had also retired to the shadows; I could see them, two stiff shadows, one tall and one shorter, standing close together.  The element of danger had gone out of their tête-a-tête, though; I could see Jamie’s head bent slightly toward Tryon’s shadow, listening.

“… brought food,” Phoebe Sherston was telling me, her round face pink with excited self-importance.  “Fresh bread, and butter, and some blackberry jam and cold chicken and…”

“Food!”  I said, abruptly reminded of the parcel I held under my arm.  “Do pardon me!” I gave her a quick, bright smile, and ducked away, leaving her open-mouthed in front of the tent.”

Own your own wee piece of Doune Castle or Castle Leoch, the seat of Clan Mackenzie! This bonnie, cotton bag bearing the stunning medieval stronghold was designed exclusively for WeeBox by our great pals at Brave Scottish Gifts.

It is here at Doune Castle, that we are introduced to many important Outlander characters, including Murtagh, Mrs Fitz and Laoghaire MacKenzie as well as Colum MacKenzie, Laird of the Clan, his wife Letitia and their son Hamish.  Much of the castle was used in filming. The huge courtyard, and great hall were used to great effect, as well as the surrounding grounds. One interesting exception was the Doune Castle kitchen. A set was built to exactly replicate the castle’s kitchen, presumably to help make filming easier.

We had 2 braw options for the ‘book’ element of this month’s WeeBox, so we decided to bring both for our Clan to try … which one did you get?

Chronicle your own Scottish adventures

Celebrate the fight for love, honour, and the Scottish Highlands with this deluxe Outlander notebook, inviting you to pen your own inspiring travels 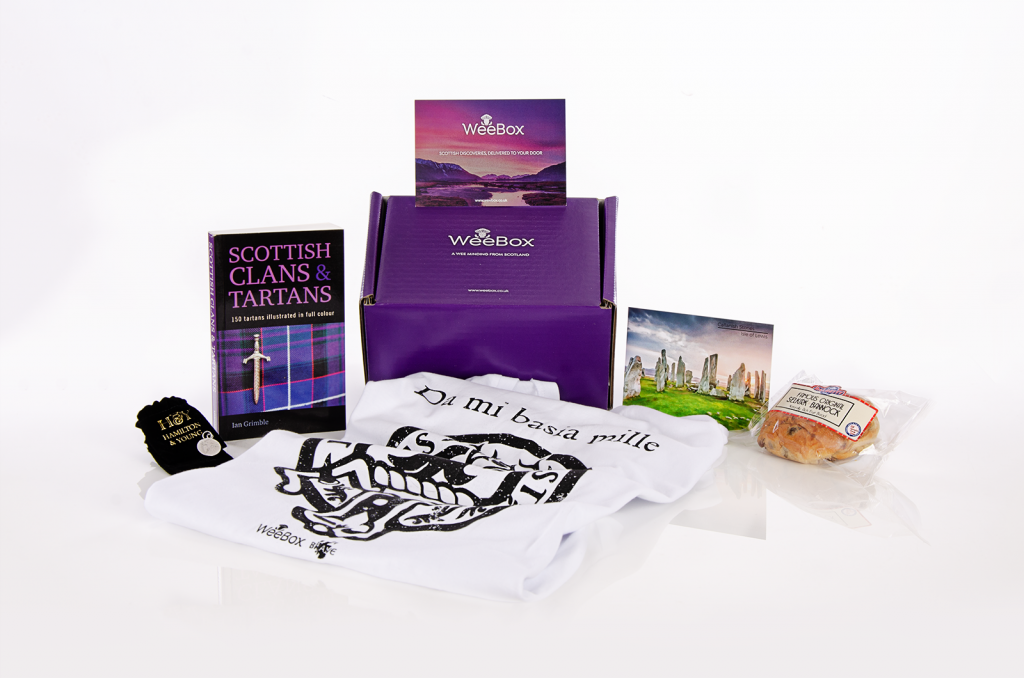 A ‘love letter to Scotland’! That is what your Outlander-inspired WeeBox brings you this July! Just like Claire, the World War II nurse of Diana Gabaldon’s Outlander books, be transported back in time to 18th century Scotland and the time of the Jacobite risings – standing stones, clans, ancient recipes and of course tartan!

Standing Stones, Clan Fraser, Dragonfly? Which charm did you get?

Widely regarded as being the authority on Scottish clans and tartan, this very special book is close to the hearts of both Scottish natives and the millions of people across the world who have ancestral connections with Scotland!

One of the bestselling books on the subject, this title by Ian Grimble is widely regarded as being the authority on Scottish clans and tartans. A comprehensive guide to this ever-popular aspect of Scottish culture, featuring 150 tartans in full colour. Alongside the tartans are histories of the origins of each clan and their plaids – we know it will be the perfect way to bring your Scottish heritage alive.

Often seen in Mrs Fitz’s kitchen, the famous Scottish Selkirk Bannock is still handcrafted today – most famously by Alex Dalgetty & Sons in the heart of the Scottish Borders! Enjoy sliced with a spread of butter, scrumptious!

In Scotland, where the term originates from the Gaelic bannach, meaning cake, bannocks were originally round, medium-sized flat breads made from a wet dough of barleymeal and/or oatmeal.  (Meal is an unsifted powder, coarser than flour, ground from any grain.)  They were cooked on a girdle, or griddle, and were cut into scones, or wedges.  Dalgetty‘s world famous Selkirk Bannocks are the benchmark for all others to be judged, and we believe that none come close.  Handmade to a recipe well over 100 years old which involves long dough fermentation to produce flavours that you would not believe possible from a fruit bread.  Using the sweetest sultanas and lashings of creamy butter, only Alex Dalgetty & Sons know how to make a true Selkirk Bannock.  Best served sliced and spread with butter, or even try it toasted for a change. For something extra special why not try making a sumptuous bread and butter pudding.

Inspired by the Outlander heroine Claire’s magical encounter in the Scottish Highlands – an event that changes her life, share these Standing Stones or let yourself be transported to our bonnie land. These Calanais (or Callanish) Standing Stones, are located on the west coast of Lewis and you can’t help but wonder at the motivation of our ancestors to build such monuments over 3000 years ago.

Je Suis Prest! Are you ready?

Brave Scottish Gifts bring you this exclusive ‘Je Suis Prest’ t-shirt to salute Jamie and the Fraser Clan! WeeBox HQ first met Thomas, the creative genius behind Brave Scottish gifts 2 years ago.  We love his often irreverent take on Scottish humour and his absolute commitment to producing high quality Scottish gifts for Scots-at-heart all over the world!

Is it your dream to visit Scotland? Well, WeeBox has the perfect tour guide for you! We highly recommend Andrew McAlindon, Andy the Highlander – unique, incredible insights and fun as you take part in the action too! Having filmed in Outlander Seasons 2 & 3, Andy transports you as one of Jamie Fraser’s Highland men 💪. And that’s not all – Andy delivers scenic, historic, whisky & custom tours too – so something for everyone, no matter what it is YOU 💜 about Scotland 🏴󠁧󠁢󠁳󠁣󠁴󠁿 Just for our WeeBox Clan this month – an exclusive discount offer inside your July WeeBox! www.highlandertours.co.uk 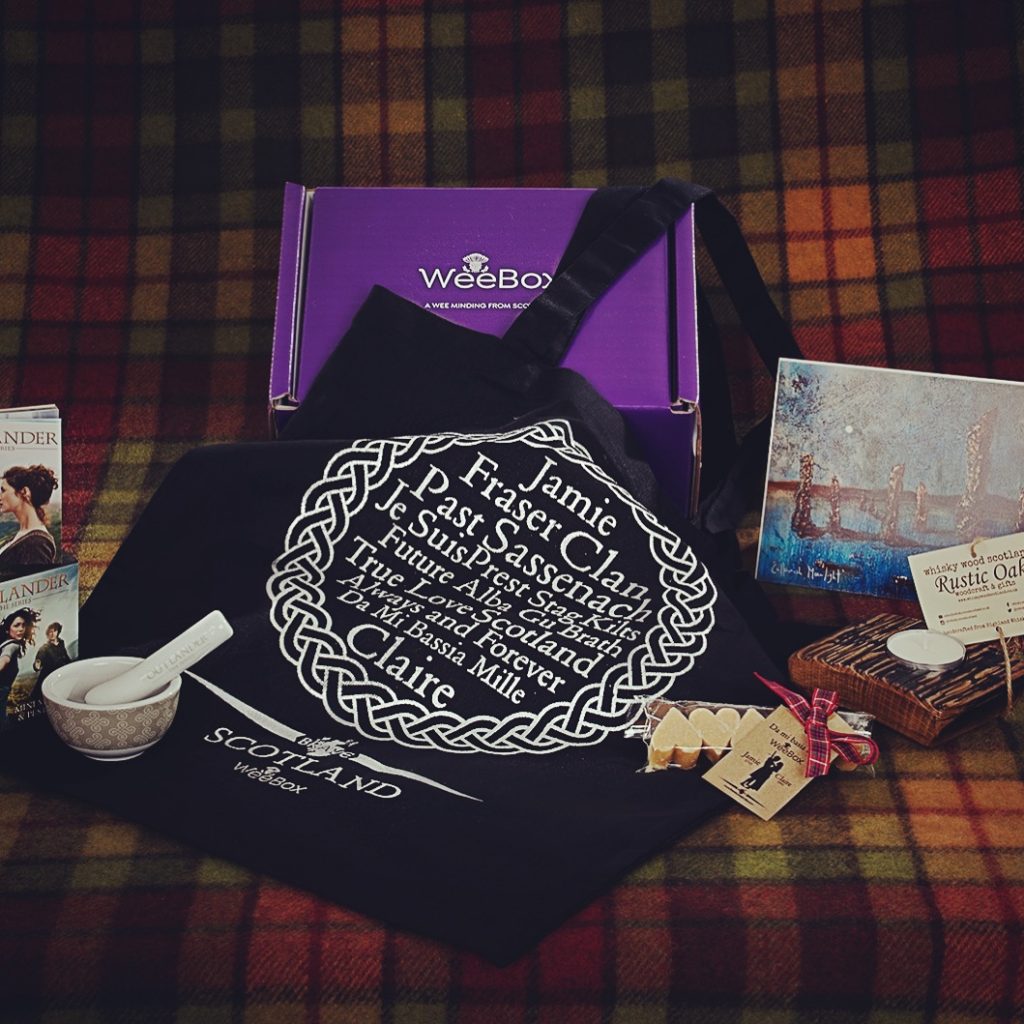 Epic Scottish scenery, Highland warriors and a love-triangle with a time travelling twist – it can mean only one thing, Outlander! If you haven’t heard of it yet, you will soon. The books and TV series have been compared to a ‘love letter to Scotland’ and this month WeeBox salutes the premiere of Season 3!

“It has always been forever, for me, Sassenach” Jamie, Outlander
The Outlander-inspired WeeBox has been curated to help you create the perfect experience for watching Season 3 unfold ….

Outlander’s heroine, Claire loves a wee dram and WeeBox is saluting her with a beautiful, handcrafted whisky barrel tea light from Whisky Wood Scotland. So pour yersel a whisky and enjoy Jamie and Claire by candlelight!

Acclaimed ‘Scotland in your Pocket’ artist Kevin Hunter has created an enchanted standing stones painting ‘Callandish Moonlight’ to transport you to the mythical Highlands. To make this even more special, our followers voted the painting hands down their favourite on our social channels – a real favourite with Outlander fans and those who just love the ancient mystery of Scotland.

Here at WeeBox HQ, we love to bring you exclusives – designs you can’t buy anywhere else! This month, we do this with a stunning Outlander-inspired cotton bag. Chic with a romantic twist, you’ll look ‘affa bonny’. Perfect for carrying your essentials around the toon!

“A priest once told me my healing skills are a gift from God.” Claire, Outlander
When WeeBox HQ discovered this small, but beautifully formed Outlander quote book which includes Claire’s mortar & pestle she used to heal the sick – we knew we had to have it for you! Perfect to display and enjoy in your home.

Finally, set the candlelight, sip your dram, turn on Outlander and indulge in an exclusive luxury, handmade Scottish tablet we have created for you! Heart-shaped for Claire and Jamie, and wrapped in Fraser Clan tartan ribbon it bears the romance of ‘da mi basia mille’ (Latin for ‘give me a thousand kisses’ and inscribed inside Claire’s wedding ring). So special and even more scrumptious!