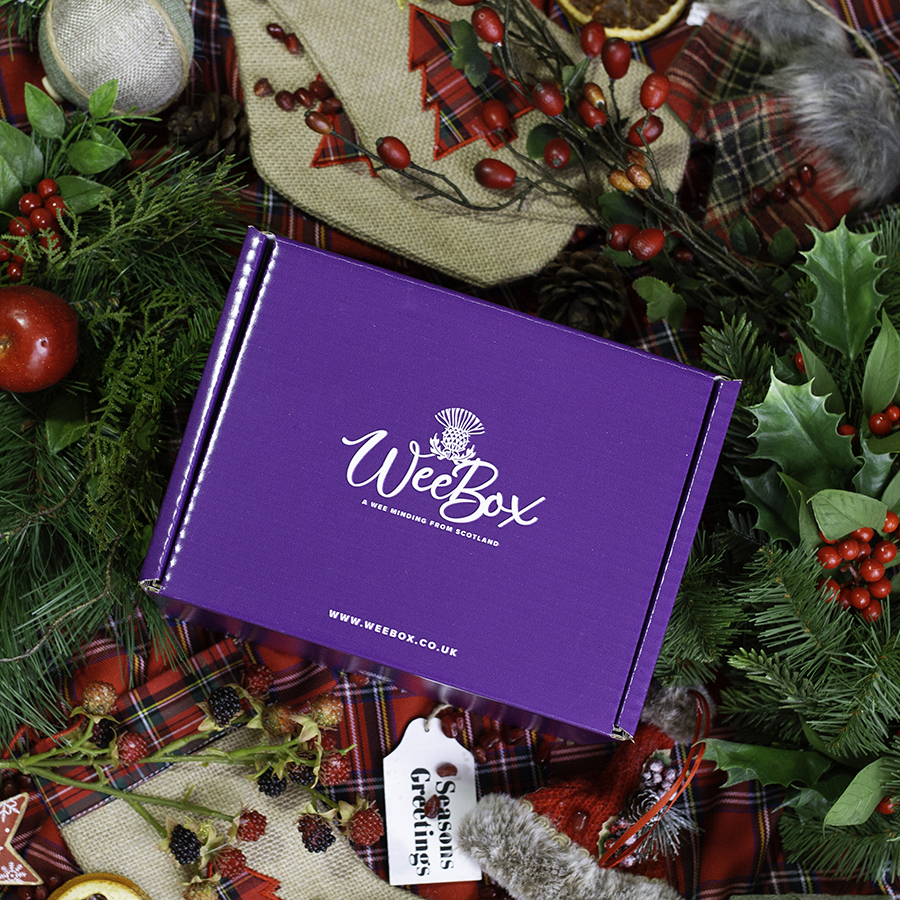 After a difficult year, we are so excited that here at WeeBox HQ it is officially Christmas time! Whether you have your Christmas tree up already or not, it’s never too early to enjoy a wee bit o’ Christmas cheer.

Believe it or not, Christmas was banned for almost 400 years in Scotland after the Reformation and wasn’t recognised as a public holiday until 1958; until then it was just a normal working day for most Scots – can you imagine?! It’s very difficult to imagine what the festive period would have been like without Christmas lights shining in the streets and Christmas decorations in shop windows everywhere. Any Christmas celebrations before this would have been behind closed doors and although it might have been a low-key Christmas, this helped to make Christmas the family celebration that it is today – securing it as a time to bring loved ones close and celebrate the warmth and togetherness that Scots are so well known for.

Scots have more than made up for this period of limited festive celebrations and nowadays, Christmas time truly is one of the most wonderful times of the year in our bonnie country. In fact, the three most likely cities in the UK to have a white Christmas this year are all in Scotland. In years gone by, thousands of people would flock to Scottish cities such as Glasgow and Edinburgh to explore the Christmas markets and make the most of the festive atmosphere. There would be carol singing in the streets, families going to Christmas pantomimes and even Scottish pipers filling the Christmas lit streets with the sound of the bagpipes.

Things might look a little bit different this year but that doesn’t mean they have to be any less special.  We might not be able to get out and about the way we used to this year but with all of your Scottish WeeBox gifts you have everything you need to create the perfect Scottish cosy Christmas.

When Christmas Eve arrives and we all get ready to settle down for the big day ahead, it is tradition to leave a wee dram and one of the delicious Macleans Highland Bakery mince pies you have in this month’s WeeBox. Sláinte Santa!

With the freezing temperatures, it probably won’t come as a surprise that many of our Christmas traditions include fire. Starting on Christmas Eve, the Cailleach – a piece of wood carved to represent ‘Old Woman Winter’ – is tossed into the fire to burn and ward off evil spirit. As the long-awaited Christmas morning arrives, families come together to see what treats lie under their Christmas tree – which will be beautifully decorated with ornaments such as your highland coo inside WeeBox this month!

You might be familiar with a festive yule log – a delicious desert enjoyed by many at this time of year. This Yule log tradition began all the way back in the 8th century when Viking families would save a log to be burned on the shortest day of the year and it was lit by the previous year’s log to bring prosperity and protection to everyone present. A more recent and common tradition involved burning a branch of Scottish rowan tree to chase away bad feeling between family and friends and bring everyone close together.

After exchanging gifts – like your bonnie Harris Tweed purse in this month’s WeeBox – it’s time for the main event – Christmas dinner! While Scots will often enjoy the well-known turkey at dinner time, you’ll also find some Scottish classics to go along with it :

After dinner, let the festivities continue with some family games, a wee dram or maybe just a nap after all of that delicious Scottish food!

There’s no denying that Christmas truly is the most wonderful time of the year – a time to relax and enjoy well deserved time with those closest to us. Here at WeeBox, we are just so happy to be able to share a wee bit of Scottish festive joy with you this month.

So whether we say ‘Merry Christmas’, ‘Blithe Yule’ (traditional Scots dialect), or ‘Nollaig Chirdheil’ (the traditional greeting in Gaelic), we hope you have the most magical time celebrating the festivities and relax and recuperate after what has been a very challenging year. After all, Hogmanay (New Years) is just round the corner…

DID YOU MISS OUT ON THIS WEEBOX? Due to popular demand we have released a very limited number of a ‘Surprise’ Scottish Christmas WeeBox, but be quick once they are gone, Santa’s Scottish elves have no more!