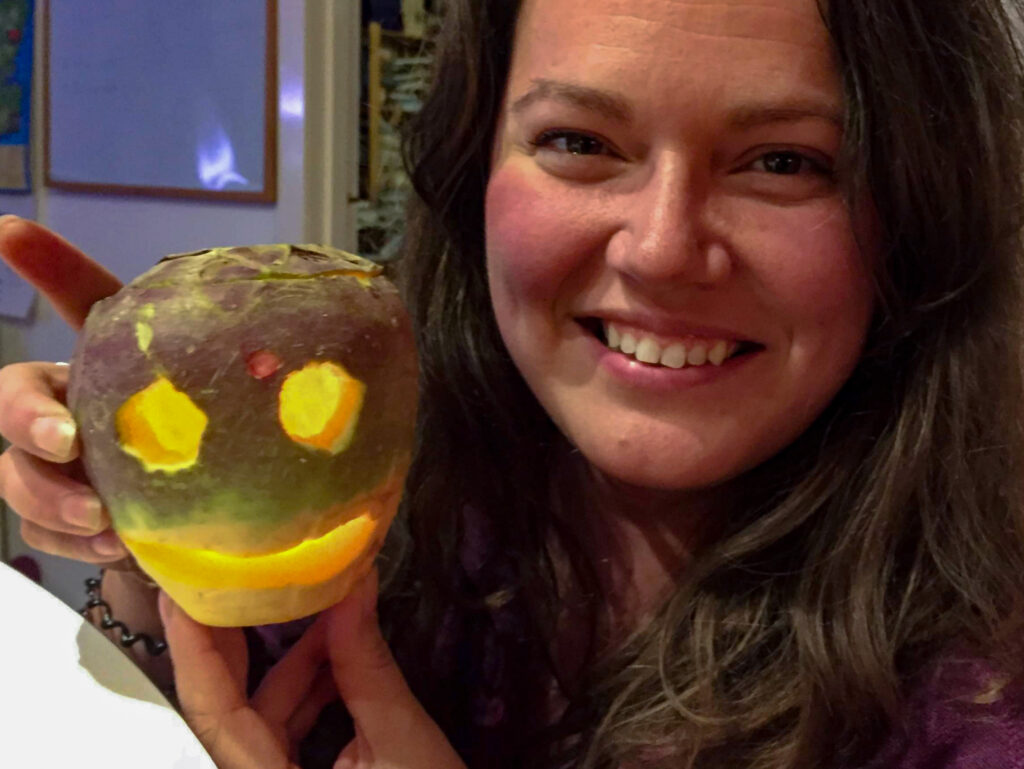 This month we are honoured to bring you a guest ‘Blether’ or blog from much loved Lilly Hurd – known to many as ‘Find Her in the Highlands’ fame! We have always loved following Lilly’s Scottish adventures and when we approached Lilly to collaborate, this special spooky season of Samhain seemed liked a perfect fit. So sit back and enjoy … we turn the WeeBox ‘Blether’ over to the beloved Lilly.

“I adore the Halloween season. So. Much. Fun. And I adore Scotland, the land of my ancestors where Halloween’s roots run deep. I recently had a chat with my friends Annie and Jenny at Stories of Scotland Podcast https://www.storiesofscotland.com/podcast), and it inspired me to read up on Scottish Halloween traditions. Here’s a quick list of 10 things I learned that you might like to know about Halloween in Scotland!

The Veil Between Worlds

Halloween is rooted in the ancient festival of Samhain. This marked the end of the harvest season and the beginning of winter. The details of the origins are shrouded in mystery but it involved a lot of fire, gathering together of the community, being thankful for a good period of light and harvest and hopeful for a safe winter, or dark period. It was a time of celebration but also of great caution. The belief that the dead walked among the living during this time made it risky business to be out and about! Fire and disguise were key tactics to staying safe from evil spirits.

This term comes from “disguising” and involves dressing up so as to blend in with spirits wandering around on Halloween. Blending in could be as simple as turning your coat inside out, to putting on your Mom’s dress or a sack over your head. Guisers would go door to door performing for treats, which might come in the form of fruit, money or sweets.

Guising costumes could also help scare any spirits. Here’s a great photo of some guisers in the 1930s – I don’t know about you but I think they’re more terrifying than any modern costumes!

You might think of sweet delicate little things but Scottish faeries tend to be quite mischievous and sometimes downright mean. You’ve got to keep your wits about you on Halloween as these creatures are looking for trouble and thanks to that thin veil again, they can easily walk amongst the living!

Predictions about future relationships were a big part of Halloween tradition. Thanks to the thin veil, it‘s the ideal time to get the clearest predictions for the future. Pick cabbage or kale to predict the height, size and financial status of your future spouse. Toss a shoe over the house, and the direction in which it pointed would indicate where your suitor would be. Peel an apple and see the likeness of your love in the reflection of the peel.

Another divination tradition involved placing nuts in the fire. Couples could test their relationship odds by observing the behaviour of roasting nuts. If the nuts roasted smoothly and peacefully, it was a good sign for your relationship. If they sizzled and popped and bounced around, well you might be in for a rocky road!

Robert Burns penned a well known Halloween poem in 1785, aptly titled “Halloween”. But I found a lesser known poem written in 1780 by a contemporary poet named John Mayne. It is also titled “Halloween” and it starts out like this:

Of a’ the festivals we hear,

For mirth, I ween,

Or yet can boast o’ better cheer,

Both poems are wonderful examples of Scots writing and delightful glimpses into Halloween traditions. Full versions of both poems can be found here:

Also known as bobbing for apples, many are familiar with this tradition. Its pretty simple – put a whole bunch of apples in a tub of water, and try to get them using only your mouth. I remember doing this as a kid and mostly just coming up with water up my nose instead of an apple in my mouth – I clearly hadn’t mastered the technique!

Similar to dookin’ for apples, this involves scones suspended on strings. The scones would be covered with treacle, known to some as molasses. Participants would try to take bites out of the scones with their hands behind their backs. Here’s a recipe for scones if you want to give it a try yourself, just prepare to get messy! https://www.scottishscran.com/easy-scone-recipe

The tumshie is also known as a turnip or neep lantern. These root vegetables are painstakingly hollowed out and transformed into spooky lanterns to scare away evil spirits. (I highly recommend a great new children’s book called Tumshie by Mark Mechan!) https://www.waverley-books.co.uk/store/product/4_nostalgia/208_tumshie–the-forgotten-halloween-turnip-lantern-by-mark-mechan/

Here’s my very first teeny tiny tumshie, which I carved in Aberdeenshire. That grin says it all – it’s a right of passage all right!

Image Source: Find Her in the Highlands

Thanks so much for reading my Halloween tid bits! This was just a tiny taste of the rich culture around Halloween in Scotland. I hope it piques your curiosity to learn more, and inspires you to try out some of these traditions for yourself!”

Lilly MacKenzie Hurd is an American writer, storyteller and photographer who is passionate about Scotland, her ancestral home. While working in corporate Boston in 2016, she decided to trade her high heels for hiking boots. She now spends much of her time exploring off the beaten path and writing about Scottish heritage on her blog “Find Her in the Highlands.” Her community Scottish Wanderlust sprung up around her blog and is a place for folks around the world to unite around the love of Scotland. Lilly is currently working on two historical novels, one set in a West Coast Scottish lighthouse and the other set in 7th Century Pictish Scotland.